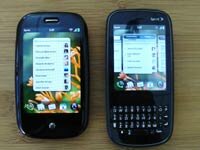 For those still learning the ropes to webOS, Palm will be introducing a new web-based development environment for webOS applications called Ares by the end of the year. The new toolkit, unveiled recently at the Open Mobile Summit conference in San Francisco, is designed to make it easy to integrate components in JavaScript in building webOS apps for the Pre and Pixi.

In the demo, a Palm engineer created a search application for Flikr. Using a simulation of the webOS interface, he dragged logos, a search field, button, list widget and other components to successive screens, and linked the app to Flikr using an Ajax request that called a Flikr API. Ares then allowed him to see a preview of the app in both portrait and landscape view using the phone emulator.

To simplify the development process, the tool will also allow you to package up the completed app, download it to the Pre or Pixi, share it with friends; even submit it to the App Catalog. It will be compatible with a variety of browsers, including Firefox and Safari. According to Palm's senior VP of application software, Michael Abbott, Ares is designed to help web developers make the leap to mobile development, and won't require any downloads or configuration, as well as including debugging and a way for developers to share libraries and APIs.

This looks like a useful web tool that should help streamline the app building process and attract some new talent to webOS. Do you plan to use Ares when it is released?