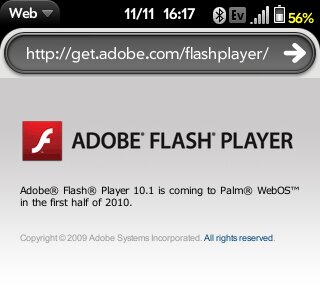 A new teaser page on the Flash website states that Adobe Flash 10.1 is coming to Palm webOS in the first half of next year. This is a positive move from last month, when Adobe demonstrated an optimized version of Flash 10.1 on the Pre and stated that beta should be available to developers by the end of the year (meanwhile, iPhone users still get this teaser page). From the Adobe Max Conference:

Adobe® Flash® Player 10.1 is the first runtime release of the Open Screen Project that enables uncompromised Web browsing of expressive applications, content and video across devices...A beta is expected to be available for Windows Mobile, Palm webOS and desktop systems including Windows, Macintosh and Linux later this year."

So the earlier part of next year for a final, end-user release sounds about right. It's quite possible Flash 10.1 will be released alongside a major webOS update (webOS 2.0 perhaps?) and no doubt will bolster the application and games lineup on the Pre and Pixi with new and established content. Who here is looking forward to the beta?