Pre users have been enjoying paid apps in the App Catalog for several weeks now; but what are the real challenges that webOS game developers face? How did the company behind the very first paid webOS application (and former #1 game on the iPhone App Store), Air Hockey, choose a price point, and how does developing for webOS differ from the iPhone? Development house Acceleroto answered these questions and more earlier this month in their blog.

The company has been through the full approval process, from applying early for the Mojo SDK, being accepted into the beta program, creating a technical demo and finally going live in the App Catalog. Definitely worth a read for those who want insight into the development cycle. Highlights after the break.

Palm first wanted a demo ASAP for the announcement of the Pixi, but since there wasn't any fast-motion games on the Pre at the time, they got to work with a "very inside team" to get it out in time:

We were invited to Palm to finish the development, but decided that timeline was so tight that the travel time to & from would actually impact the progress.  We had a Pre to test on & the SDK tools were in place to check for differences on the Pixi.  The demo for the Pixi launch was ready on time...It was a technology demonstration to be used as part of the Pixi announcement.  The paid version needed more polish, more options, more features, etc.  The first 90% was done, but there was still 90% to go.  Through help straight from Palm and lots of sleepless nights, Air Hockey for webOS was ready the day Palm’s back end developer portal was ready to accept apps.

Also, contrary to previous rumors that Palm was paying companies to develop apps, Acceleroto received no such benefit:

No money made it our way from Palm for the development of Air Hockey (we didn’t ask though).  Palm keeps 30% of the sales.  We’ll get the other 70%. 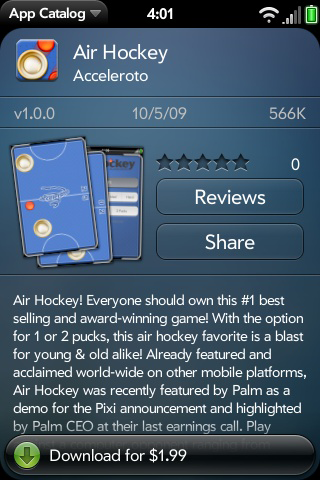 And how did the company decide on a $1.99 price point?

Economics 101.  It’s no secret that the iPhone version of Air Hockey has been $0.99 since it launched in July 2008.  When it launched, there were approximately 10 million iPhones & iPod touches that could run it.  At the launch of Air Hockey for webOS, there are something on the order of 1 million Pres that can run it (another guesstimate).  There’s more though.  There were about 3000 apps available when Air Hockey launched a couple weeks after the App Store opened.  At the time of writing, there are 125 apps available in Palm’s App Catalog...Economy of scale.

As for webOS vs. iPhone development, they discuss how their primary coder didn't know any JavaScript; but because it borrows from other languages, the nuts and bolts were quick to learn. Other differences between the iPhone Objective-C language and JavaScript included execution speed (executable binary vs. real time scripts), and development environment (Xcode vs. Mojo SDK).

Intially getting your code onto a Pre is actually a whole day’s work easier than it was on the iPhone. Debugging, however, is 1000x easier in Xcode.

They end their self-interview of sorts pointing out the main hurdles of development, including:

Have you run into any similar issues in developing your webOS apps? Also, do you agree $1.99 is the right price point for Air Hockey? Check out the full Q&A for more details of Acceleroto's experience.